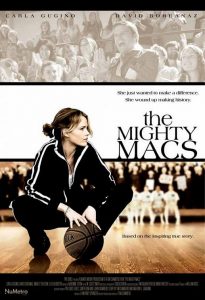 Last Friday, I attended the Red Carpet Premier and press conference of The Mighty Macs.  It was the second time that I saw this movie.

It was great to see a clean movie, with no sex or swearing.  Tim Chambers, (Writer, Producer and Director) of the film said he wanted to  make something they were proud of, could take their parents to, G rated and give their kids a choice that is wholesome content.  I think Tim achieved that goal.  The film is clean, yet exciting.

The Mighty Macs tells the story of Cathy Rush, Coach of Immaculata College’s girls basketball team.  They were in need of help and Cathy gave them what they needed to win.  Despite not having a gym, uniforms or money, Coach Rush has the spunk needed to lead the team to their goal – Immaculata won the first all girls college championship.

Chambers takes some liberties to keep the story alive and moving.   And, although The Mighty Macs is not a “Catholic” movie, it has a very positive message.  This is a work of the New Evangelization.  Although not explicitly Catholic, the film presents a message of hope, trust, and working together to achieve our dreams.

Want to see a clean movie with a positive message?  Take your family to see The Mighty Macs this weekend!

Want to hear from Tim Chambers, Cathy Rush, Stars and original players? Next weekend, I’ll share some interviews from them and more in the iPadre Podcast.