↓
Home→Blog→My experience of the altar rail

Recently there has been a lot of buzz about returning altar rails in the last few years. One of the latest blog post was by Deacon Greg Kandra over at the Deacon’s Bench. After the Second Vatican Council, altar rails were ripped out without any explanation. It was said that was the command of the Council. However, not only was there no such command, there was not even a mention of the altar rail in Sacrosanctum Concilium.

The purpose of the altar rail was two fold. First, it separated the sanctuary from the body of the church. For Catholics, the sanctuary is our Holy of Holies. This is where the sacrifice of Christ takes place in the Holy Sacrifice of the Mass and where Christ remains in the tabernacle in His abiding presence in the Most Blessed Sacrament. The second purpose of the altar rail was for the Communion of the faithful.

It was only on June 17, 1977 that the Holy See granted an indult with permission for the faithful to receive Holy Communion in the hand. An indult is a a permission granted by the Holy See, giving an exception from a norm of the Church. That means that the norm for reception of Holy Communion in the Roman Rite of the Catholic Church remains kneeling and on the tongue. So, the indult gives what we could say, a relaxation of the law.

With the indult, the Holy See gave regulations that demanded proper reverence and protection for the Most Blessed Sacrament. At all times, Holy Communion should be protected from profanation by using a Communion paten to catch any fragments that may fall from the Host. The Sacred Host is to be placed in the left hand which is held flat over the right hand, the Host is to be immediately taken with the right hand and placed in the mouth and any particles in the left hand consumed.

Anyone who distributes Holy Communion can relate that since the change, not only is Holy Communion received poorly, but very little respect and reverence is given to Our Lord by many receiving the Most Holy Sacrament.

There are the “body snatchers” who reach out and grab the Sacred Host out of the minister of Communion, there are the “flippers” who take the host in one hand and flip it into the other before receiving. Then there are the “poppers” who take the Host in their hand, do a drop of the hand so the host slides down their fingers and proceed to pop it in their mouth as if it were a piece of candy. There are also “tourists” who walk away with the host, place it in their pocket, in a book and take it home with them for what purpose God only knows.

During Mass at St. John Lateran, on May 22, 2008, Pope Benedict XVI began giving Communion to all who received from him kneeling and on the tongue. His mater of Ceremonies, Monsignor Guido Marini stated that Communion kneeling and on the tongue helps to emphasize “the truth of the Real Presence (of Christ) in the Eucharist, helps the devotion of the faithful, and introduces the sense of mystery more easily.” Since that Mass, the practice has become the norm at all Papal Masses.

People who are exposed to Eucharist Adoration grow in their love, reverence and devotion the the Most Blessed Sacrament. The more we preach about the Real Presence and try to form our people in proper reverence, they also have a desire to receive kneeling and or on the tongue.

Since I learned to celebrate the Roman Rite according to the Extraordinary Form also known as the Tridentine Mass, a parishioner who owned a professional wood working company donated a brand new altar rail. At first I was hesitant in accepting this gift in fear of the response of the people, but finally decided to graciously accept the beautiful gift to the parish.

Since installing the altar rail in 2010, a number of people requested to use if at all of our Masses. We began using the altar rail for daily Mass shortly after it was installed. However, a number of people kept requesting using in for all of our Masses. On February 22, 2012, the First Sunday of  Lent, I announced that we would distribute Holy Communion at the altar rail due to the many requests I have received. I reminded the parish that they had the option to receive standing or kneeling, on the tongue or in the hand. Since that day, a majority of the parish received kneeling and a good number of people now receive on the tongue.

I have received a few complaints and even one family choose to leave the parish. Isn’t it funny that people are tolerant of those who would do something that goes against Liturgical law, but not of those who would rightly request their option to receive by the Church’s long held normative practice of receiving kneeling and on the tongue. However, with time, I have seen more who choose to receive both kneeling and on the tongue.

I would recommend that everyone reads and pass around copies of “Dominus Est! It Is The Lord!” by Bishop Athanasius Schneider. Bishop Schneider gives solid historical background to Communion on the tongue and kneeling.

Here are some pictures of before, building, installation and after the altar rail was installed. 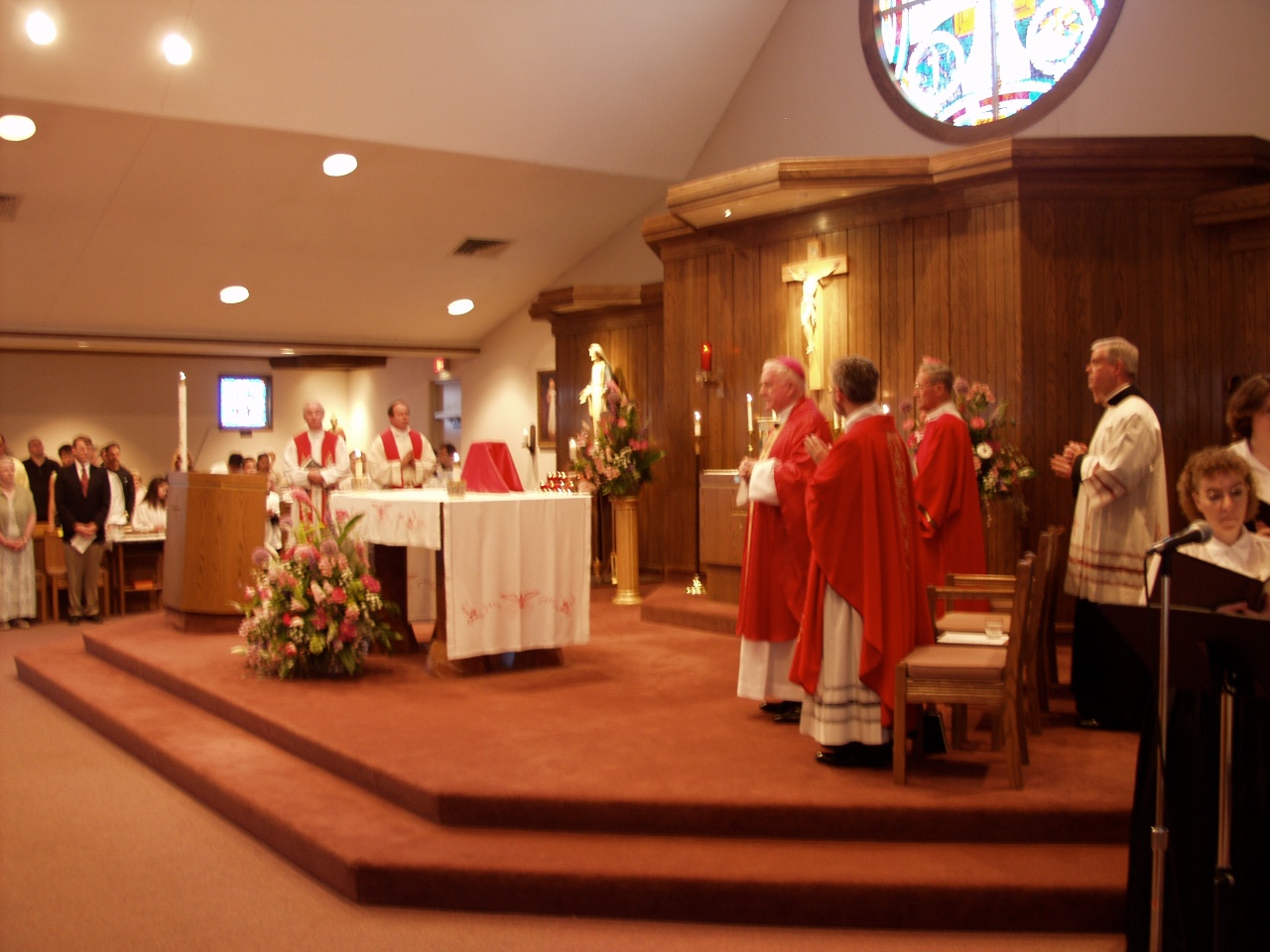 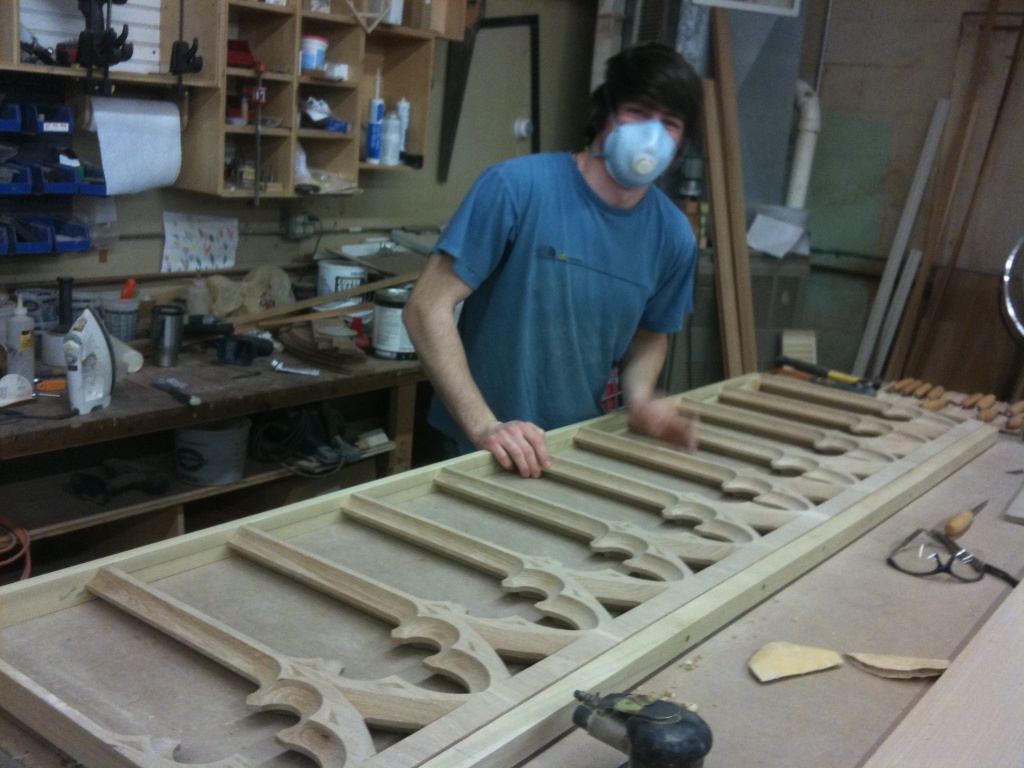 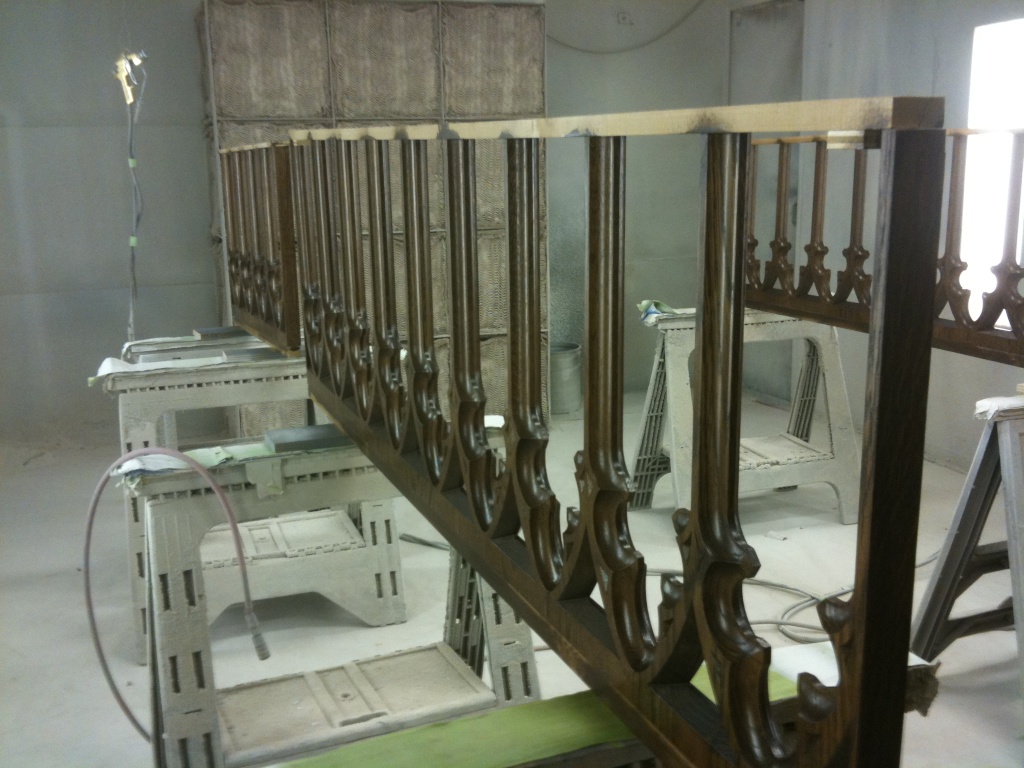 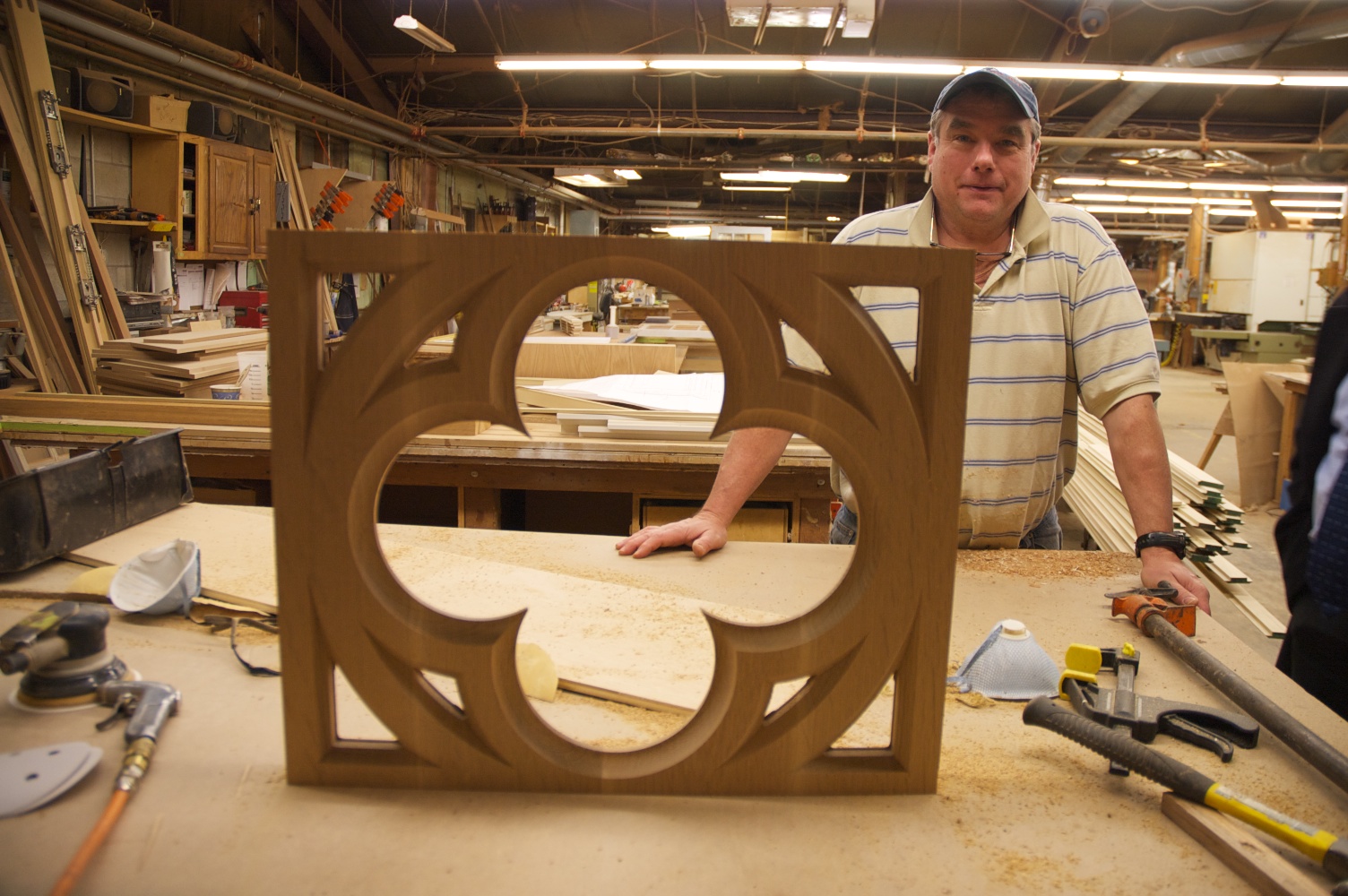 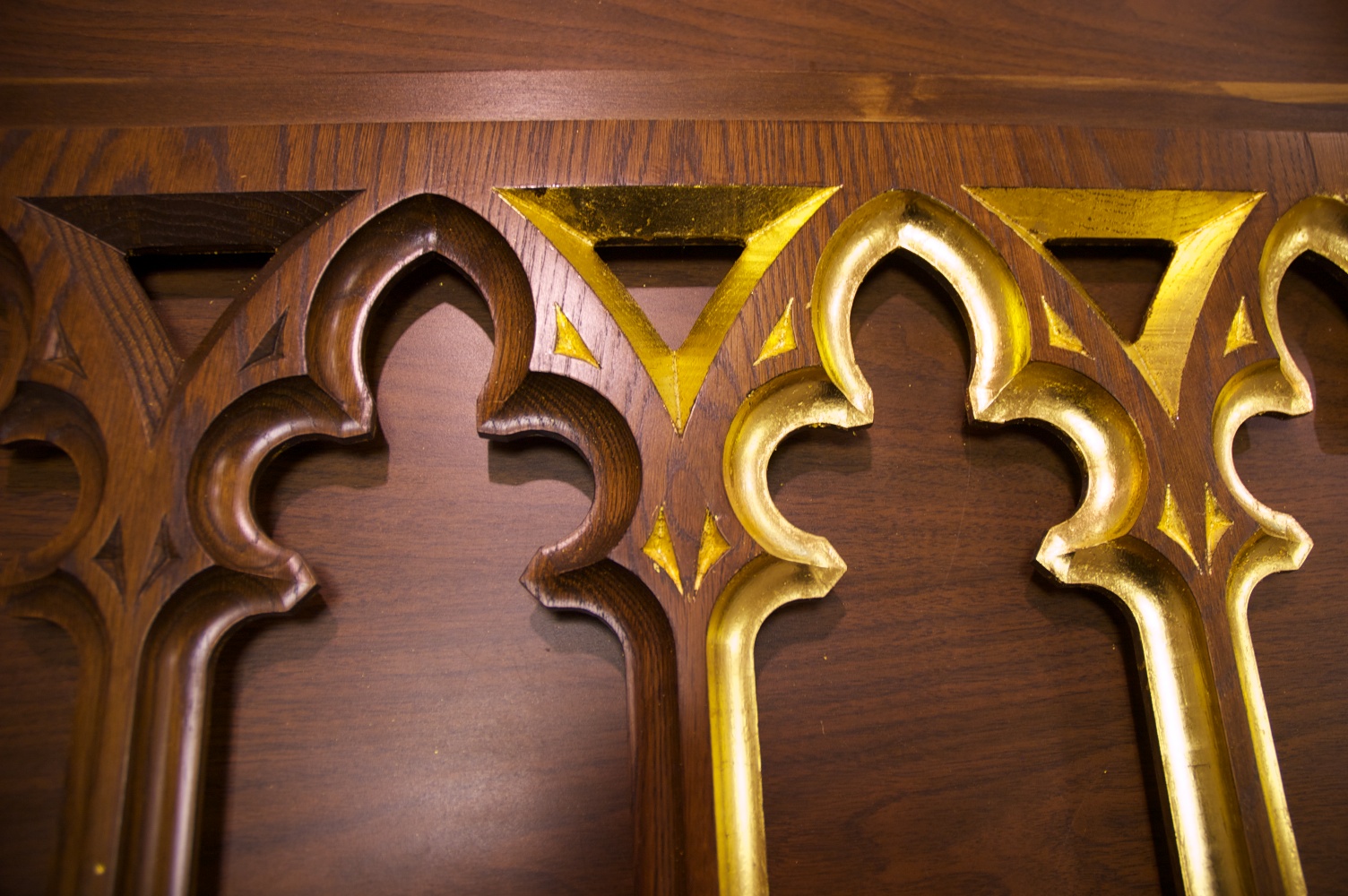 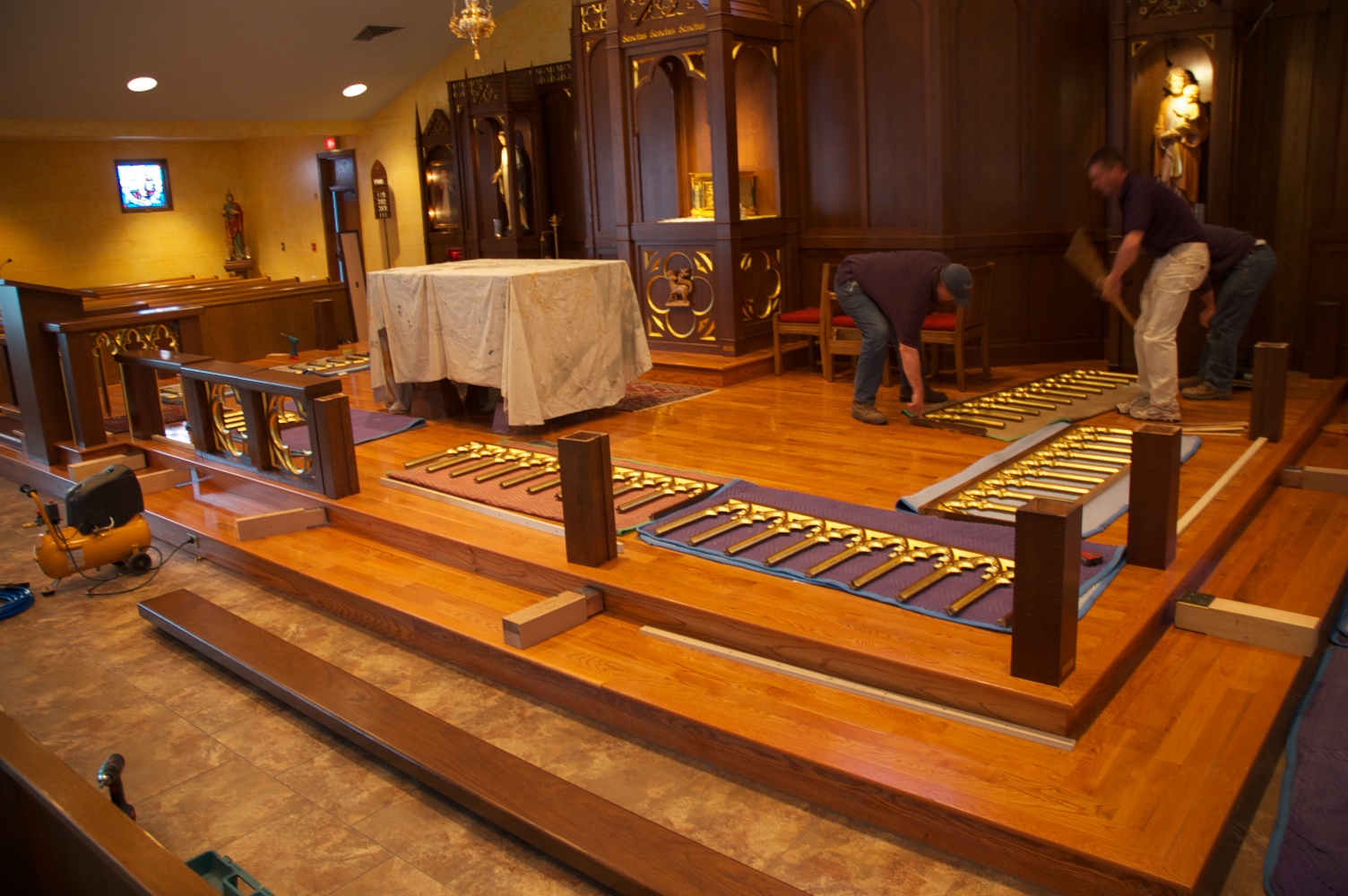 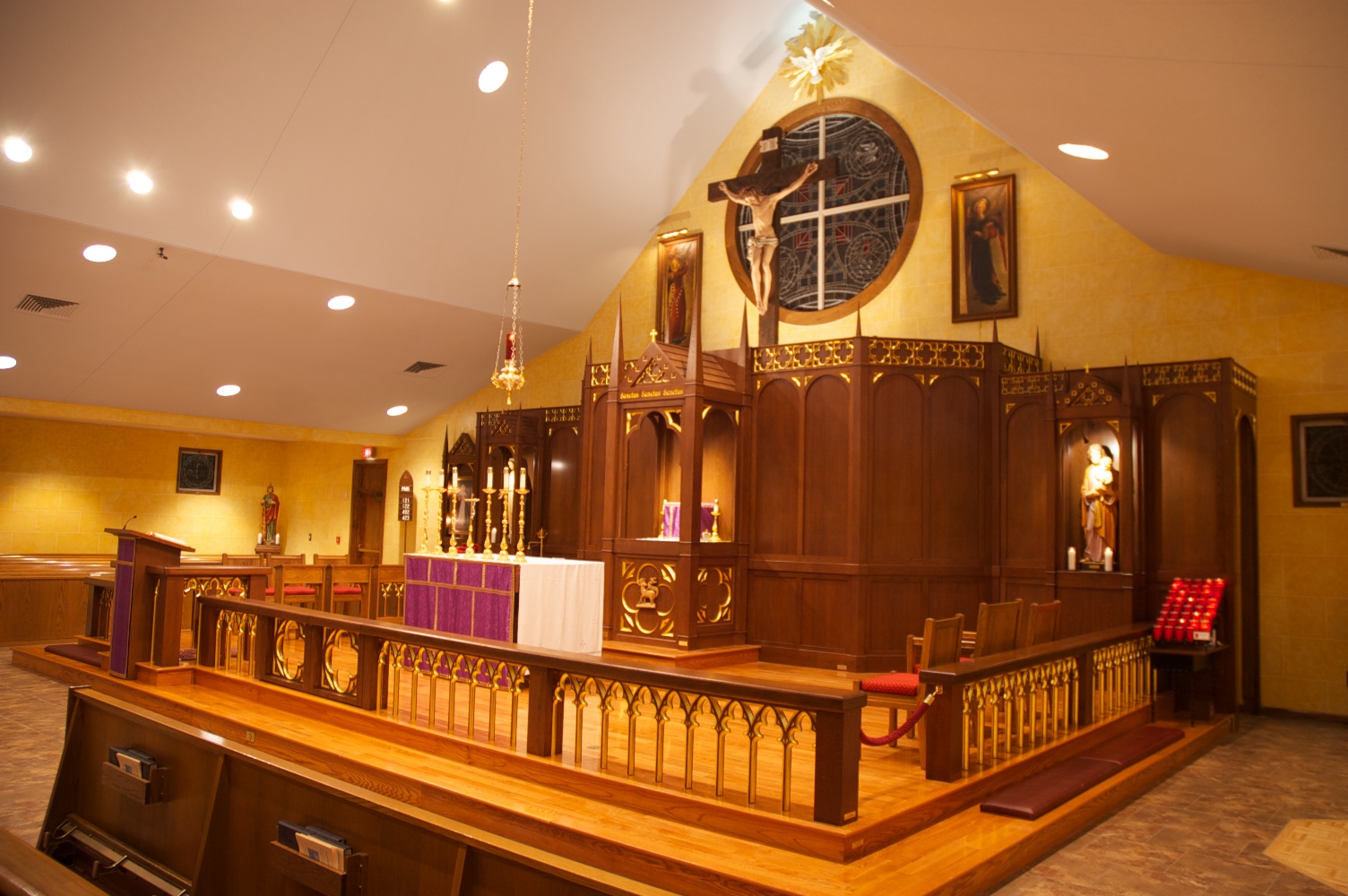